Fruit Pig was started in 2008 by Matthew Cockin. Matthew had notched up 20 years in the RAF and was keen to go back to his country roots and learn a new skill. Soon after starting the business, newly married landscaper Grant Harper moved into the area eager to set up a smallholding. The two met, found they had a great deal in common, and they’ve been together as Fruit Pig ever since. Although Fruit Pig started off as a general, rare breed butchery, it wasn't long before Matt and Grant began specialised production of their rare, fresh blood black puddings. The timing was good. Food lovers were becoming more and more intrigued by artisan, specialist food products. Several notable chefs helped champion Fruit Pig Black Pudding, and at the beginning of 2018, they moved into a larger, bespoke facility and a new Fruit Pig chapter has opened. 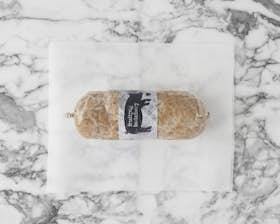