Geoff and Kim Bowles are often compared to Pop and Ma Larkin in hit 90s TV series The Darling Buds of May for their warmth, jolliness and honest, down­to­earth farming. Choosing to shun high­ intensity methods in favour of sustainable systems, they run a herd of 160 Jersey cows that they milk only once a day. The cows eat the clover that grows in abundance on the farm. ‘It’s how everyone used to farm sixty years ago,’ says Geoff. When they first made the transition to organic in 1998, Geoff would rise at 5am to milk the herd, often working a twenty­ hour day with help from Kim and their three children. Sixteen years on, Ivy House Farm supplies organic dairy products to over 150 farm shops and cafés. Now Geoff is able to relax a little, as his son Darren has taken over the milking. The farm also employs people from the local village of Beckingham – up to ten on a good day. Ivy House’s products are all organic, unhomogenised, pasteurised and produced to order from the morning’s milking. Their clotted cream butter is a favourite with the punters, and to Kim and Geoff there is no better accolade than the appreciation of returning customers. ‘Bless them all,’ they say. Geoff likes nothing better on a frosty morning than a steaming bowl of porridge with thick Jersey cream from his own cows. >*‘We love Farmdrop because it gets good food to busy people.’­* **Geoff Bowles, Ivy House Farm** ● Organic, unhomogenised, pasteurised dairy products ● Members of The Soil Association and Organic Farmers and Growers ● Part of a countryside stewardship scheme to replant old hedge lines and encourage indigenous plant species 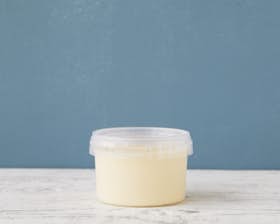