Co-founded by Tom Barton and Philip Eeles in Brighton in 2009, Honest Burgers started out cooking great British burgers from a tent in muddy fields, mostly in the rain! By 2011 they opened a shoebox restaurant in Brixton Market, making everything from scratch and Tom cycled eight miles every day to pick up the best beef in London. Fast forward a few years and Honest launched their very own south London butchery, where they now make their own burgers. Every single burger is made using exactly the right amount of UK grass fed chuck steak and rib cap from native breed Gloucestershire cows. They also chop their burgers instead of mincing them, which helps keep as much flavour in and a more tender texture. Next door to the butchery is the Honest Kitchen, where they make all their sauces, relishes, pickles, drinks and their famous rosemary salted chips, once referred to as "edible crystal meth" by Jay Rayner. 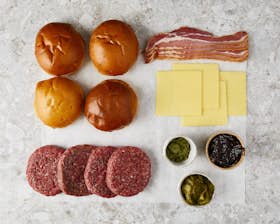