View all our recipes

Berkeley Farm Dairy is owned and run by the Gosling family who have been producing and supplying Guernsey milk since 1908. The dairy products are made using milk from their own herd of Guernsey cows as well as two local organic herds. All the organic Guernsey milk is produced at Wood Farm, a 350 acre mixed arable and livestock farm.  The family have 120 Guernsey cows producing milk and 60 youngstock waiting to enter the herd when they reach 2 years of age. They operate a system that aims to maximise animal welfare and freedom. The cows are kept outside grazing grass during the spring, summer and autumn and are generally only kept inside when it is too cold or too wet which is when they choose to be inside. During the winter, all the cows are bedded on a deep litter straw system which allows them the freedom to carry out natural behaviour which is not always possible with more conventional cubicle systems.  The cows are not pushed too hard to produce milk and have lived up to 16 years of age. As an organic farm, they aim to use antibiotics and hormones only when absolutely necessary rather than routinely as with some conventional systems. If the team do use antibiotics, the milk from the cow must be kept from human consumption for double the time allowed in conventional farming. Homeopathy has often been a worthy replacement for more conventional medicine.    Berkeley Farm take organic farming principles very seriously. A large proportion of the concentrate feeds (e.g wheat) fed to the cows are grown on the farm. They are prohibited from using chemical sprays or inorganic fertilisers. Instead they manage weeds and diseases using traditional crop rotations and fertilise the soil with animal manures and nitrogen from clovers and other legumes. The farm has now been organic for over 15 years and the difference in wildlife, in particularly in the soil, is significant.   Berkeley Farm use traditional methods of milk processing which focuses on taste rather than convenience. They pasteurise the milk but do not homogenise. Homogenising breaks down the milk fats which they think affects the taste. The milk has a traditional 'cream line' which is only seen in milk that has not been homogenised. The products are made milk from Guernsey Cows. Guernsey cows are a tradional breed, their milk has high butterfat ratio and rich and creamy texture. Guernsey milk has a lovely golden colour that distinguishes it from milk from more conventional breeds. The Guernsey products contain less A1 proteins. Most Guernsey cows are 'A2 cows' and do not produce the A1 protein in their milk. The A1 protein is the most common cause of discomfort felt by people with digestion problems after drinking milk. You should therefore feel better after drinking the Berkeley Farm Products. The team at Berkeley farm and work hard to try and achieve a fully A2 product. 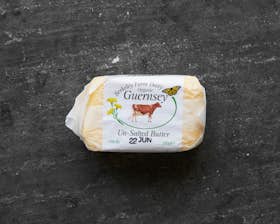 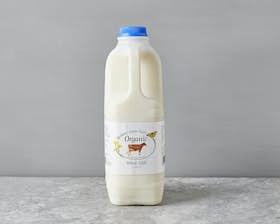