Albacore Tuna is caught off the coasts of Oregon and Washington using traditional hook & line methods that allow the fishermen from this long established fishers co-op to focus on quality.

We buy our albacore from Lars on the Aquvik, who fishes for a Cooperative owned by over 575 members fishing the waters of the North Pacific. Each member is a small boat hook & line fisherman and owner of the cooperative, and therefore receives the benefits of ownership.

The Cooperative serve families of small boat fishermen and the health of coastal communities. The cooperative was founded to serve fishermen by getting the fairest price for their catch and giving them access to processing and packaging that they wouldn’t be able to achieve working on their own.

We have chosen to sell albacore tuna rather than yellowfin or bluefin tuna, as the stock is in relatively good shape. Albacore caught by U.S. fleets in the North Pacific Ocean with trolling lines or handlines and hand-operated pole-and-lines are generally rated "Best Choice " by many of the sustainability ratings, such as the Marine Conservation Society. The albacore population in the Pacific is healthy, and overfishing is a low concern. This is in spite of the fact that catches since 2012 have continuously declined, with the 2017 catch of 48,836t being the lowest since 1990 and well below the maximum sustainable yield (a much discredited method of evaluating a fishery mind you, and not one that we rely upon entirely). An explanation for this decline is not available at present. More positively, there's little to no bycatch in this fishery. Management is rated moderately effective overall and recently introduced a precautionary plan to freeze the number of fisherman permitted to catch albacore, though there are no controls on the amount of fish they catch. Because they are caught by hook and line, there's minimal impact on the seafloor, but more information is needed about this fishery's effect on the ecosystem.

Albacore from other fishing areas and caught with drifting longlines or deep-set longlines are on the "Avoid" list of most sustainability rankings so be careful to check how and where your albacore was caught. The catch of bycatch is a major concern, and management for these fisheries is rated ineffective overall.

With a very high oil content, albacore tuna is tasty raw and seared. Albacore tuna has a firm, beef steak type texture, with large flakes and a mild rich taste to it. It has a much lighter colour than yellowfin or bluefin tuna, ranging from a light beige to rosy pink in the raw state. It is also has the most omega-3 amongst the tunas. Our albacore is sashimi grade, but if you like grilled tuna you will love Albacore - for the best flavour cook a little pink in the centre. 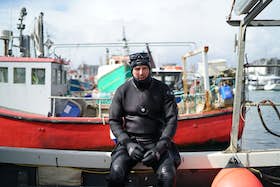 We provide the ability for the fishers to land, process and sell their own fish, offering full traceability through the supply chain - a first in the UK. By working only with small-scale boats of under 10ms in length, there is significantly less damage to the marine environment than from the large trawlers. The fishers are paid a fair price, agreed in advance - thereby creating a market mechanism for rewarding those fishers doing the least damage to the environment. Our fishers land late in an evening, or early in the morning, we pack and process during the day usually into 300gm fillet packs, and put the fish on the Intercity train to Farmdrop customers in London for same-day delivery. It’s hard to beat that freshness, and because we use only static nets or hand liners, the quality is unbeatable. We trace back to each boat, and all our retail packs state the name of the fisher and method of catch. We also blast freeze our fish - this is an integral part of our ethos: the small-scale fishers are often unable to get out in poor weather, so in order to meet customer demand and be able to continuously supply, we sell their fish frozen when they are not able to get out to sea. In blind tastings, blast frozen, freshly landed fish tasted really good compared to fresh fish that is a few days old, in fact, many people preferred the frozen! We have recently been audited by the Soil Association, and are the UK’s first wild fishery permitted to use their logo. We also work with Exeter University’s marine biology department to help verify the science behind what we do, and videos and links to their research is publicly available.

More from Sole of Discretion 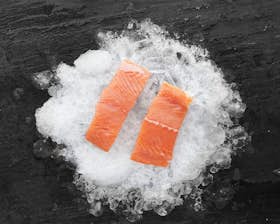